The ancient, royal city of Krakow is a unique symbol of Polish national identity. Enchantingly picturesque, rich in relics of all epochs, it represents the thousand-year-long history of the Polish nation. In Krakow you can admire many different styles of architecture, unique Romanesque objects, monumental Gothic edifices, and masterpieces by some of the most outstanding architects of the Renaissance and Baroque period. Krakow has always been a centre of Polish culture and science. Damaged by fires, wars and foreign occupation, it has always revived and continued to fascinate with its beauty. 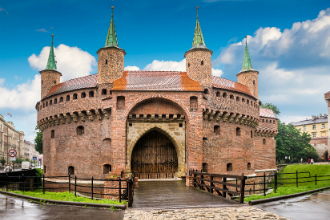 As long ago as the 11th century Krakow became the capital city of Poland. The Royal Castle and cathedral on Wawel Hill was the coronation and burial place of Polish monarchs. In the 13th century the layout of the city, which has been preserved till today, was established with what is still one of the biggest market squares in Europe (200 m x 200 m), a Gothic-Renaissance Cloth-hall (Sukiennice) and the Town-hall tower. The city fortification system was built in the 13-15th centuries, parts of the wall, four turrets and a barbican have survived to this day. The site of former walls has been replaced by a green belt called Planty. 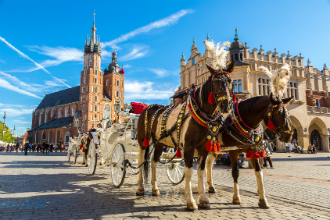 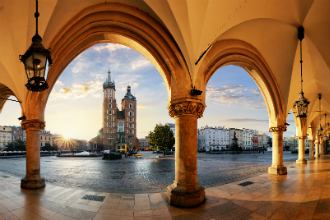 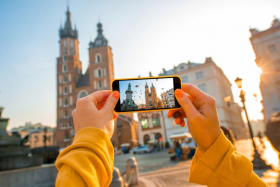 In the 14th century the Academy of Krakow (later the Jagiellonian University) one of the oldest universities in Europe was founded. Nicolaus Copernicus (Mikolaj Kopernik) was one of its students. Krakow is renowned for its numerous old churches, including the Gothic St. Mary's Church famous for its magnificent altar carved by Wit Stwosz. Probably the most famous landmark in Krakow is Wawel Castle situated on Wawel Hill overlooking the river Vistula. This Renaissance castle boasts a beautiful arcaded courtyard, magnificent interiors and the famous the Flemish tapestries. 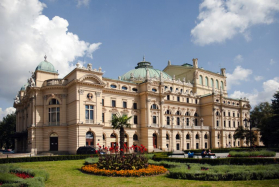 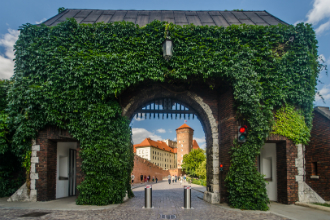 As well as the Renaissance castle Krakow also has a number of beautiful palaces of the same period. These belonged to the rich citizens of the city. One example is the Pod Baranami Palace. After the partition of Poland (by the end of the 18th century), Wawel became a necropolis for national heroes (Prince Józef Poniatowski, Tadeusz Kościuszko) and poets (Adam Mickiewicz, Juliusz Słowacki). Later this role was taken over by the church vault of the Paulite Fathers in Skalka. In this period many museum collections were founded, such as the art collection of the Czartoryski Family (with Leonardo da Vinci's "Lady with an Ermine"). 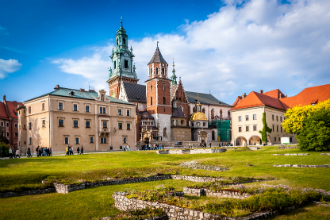 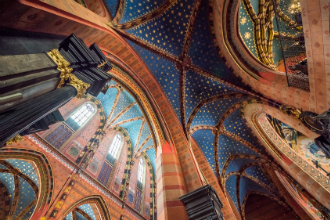 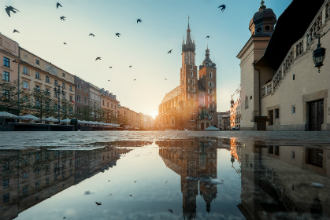 Krakow is also the city of Karol Wojtyła (the pope John Paul II), the composer Krzysztof Penderecki, and many other famous people. Krakow is one of the greatest centres of science and Krakow University of Technology is one of its universities. In 1978 Krakow was entered in the UNESCO World Heritage List.